Paul Batou, a native Iraqi artist, received a degree in pharmacy in 1982 from the University of Baghdad. While in school, Batou worked and was inspired by many teachers and artists studying at the University. In 1980, he had his first art show in Baghdad. During his years spent in Baghdad, Paul Batou placed his art in several galleries, learned to play the guitar, and was forced into service for the Iraq-Iran war as a medic. In 1989, he left Iraq with his family and moved to Los Angeles. In the United States, Batou continues to create art and write poems that inspire allt hose close to him. 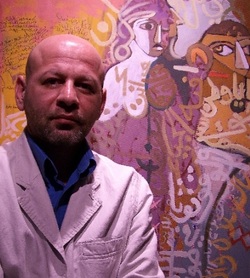 Identity
I am not Assyrian or Chaldean or Akkadian.

I am not a Christian or Muslim or Buddhist.

I was born in Mesopotamia, Uruk, Nippur, Shuruppak, and Sippar.

I was born in Babylon, home of Anu and Ishtar.

I am a son of Enlil , Shamash, and Gilgamesh.

I am a son of Ishtar, Ea, and Nunsun.

I was killed once by a flood,

And a million times by a creature,

I was killed by a nation,

From My Book “My last thoughts about Iraq”


My colors are united in one art piece reflecting the tone of the Earth, the language of the universe, the cry and pain of the oppressed people. On my canvas, the black, red and white are in harmony just like my soul. I would love all the people to achieve that kind of unity.